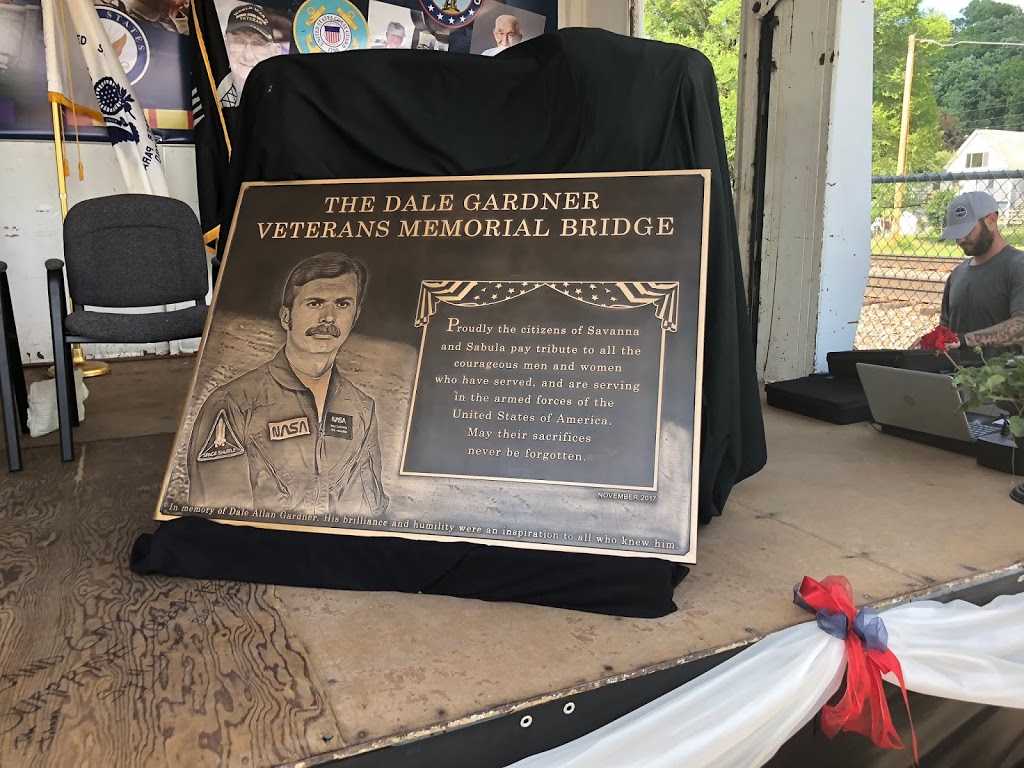 “What an exciting day for the city of Savanna, its neighbors across the Mississippi – Sabula – and the thousands of drivers who will use this bridge every day,” Gov. Rauner said. “The Dale Gardner Veterans Memorial Bridge is more than a transportation structure, it is a tribute to all of our men and women who have served including astronaut Dale Gardner. This bridge will ensure that Dale’s life and his amazing accomplishments will forever be remembered.”

House Joint Resolution 58 designated the Savanna-Sabula Bridge as the “Dale Gardner Veterans Memorial Bridge” sponsored by State Representative Tony McCombie (IL–71st) in the Illinois House and Senator Neil Anderson (IL–36th) in the State Senate was unanimously adopted by both houses in Illinois General Assembly. The plaque was unveiled today by its designer Alan St George, Governor Rauner, and the Mayor of Savanna.

“Growing up in Savanna my Mom would often reminisce about her classmates, but always had a special place for her friend, the astronaut Dale Gardner. She was so proud of him and because of her memories, I felt like I knew him too. Today, after meeting so many of his family members, I know that he was a special person and left a positive mark on everyone he met.” said Rep. McCombie. “It was truly an honor to be asked by Dave Engaldo and the Savanna High School Class of 1966 to carry HJR 58. The amount of work and dedication it took to naming and celebrating our beautiful bridge spanning the Mississippi is truly amazing. The Dale Gardner Veterans Memorial Bridge is a wonderful tribute to all of the veterans that serve our country and give us our Freedom. ”

Dale Gardner was a the valedictorian of Savanna Community High School class of 1966, and earned a Bachelor of Science and Engineering from the University of Illinois in 1970 with a 5.0 GPA. After graduation he joined the US Navy where he earned his Naval Flight Wings and rose to the Rank of Captain. In 1978, NASA selected Captain Gardner to be an astronaut where he logged 337 hours in space, and orbited the earth 225 times. Before passing away On February 19, 2014, at the age of 65, he earned numerous awards and medals for his service and accomplishments.

At the dedication former NASA Astronauts Capt. Daniel C. Brandenstein and Brigadier General Robert L. Stewart shared their memories of Capt. Gardner – describing to the crowd how unbelievably smart and talented a person Dale was.