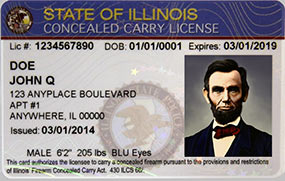 Rep. McCombie reminds Concealed Carry Permit Holders that, “if you do not renew your permit at the five-year mark, you will have to start over from scratch.”

According to the Illinois State Police, they are still working on the online renewal process after experiencing some early technical difficulties with their website portal. Many instructors are recommending permit holders complete their class within the six-month window of renewal deadline and, as soon as you can, start the renewal process within the five-months preceding the deadline.

There is a three-hour state-approved education requirement for renewal, as well as a $150 renewal fee. The Illinois State Police expects likely delays as the volume of renewals increases, so turning in renewal paperwork as early as possible once the State Police approve the renewal process is highly encouraged for all Concealed Carry Permit Holders up for renewal.

Rep. McCombie went on to say, “I have already heard from many frustrated individuals that they cannot yet renew. I will continue to communicate as updates from the Illinois State Police are received to begin renewals. I truly appreciate the eagerness of Illinois residents to lawfully exercise their Second Amendment Rights.”