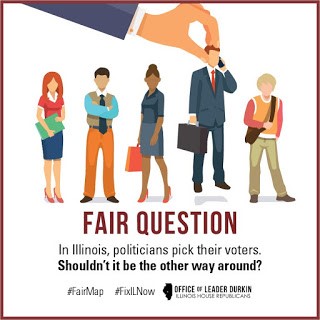 State Representative Tony McCombie (IL-71st) announced she is joining 43 of her House Republican colleagues by co-sponsoring HJRCA 10.  Implementation of this constitutional amendment will take the shady redistricting process out of the control of corrupt politicians.

“The time of politicians picking their constituents must come to an end. Communities are being divided under the current mapping process. Voters are being manipulated, and their voices are not fairly heard,” said Rep. McCombie. “I look forward to working with the newly elected Governor and my colleagues in the legislature to pass this Constitutional Amendment. Governor Pritzker has stated more than once, that he supports an independent commission. I plan to hold him to his promise to veto any map that is gerrymandered along partisan lines.”

HJRCA 10 would establish an independent commission, comprised of 11 members, charged with proposing a legislative map. The commission would be required to hold public hearings both before and after releasing a proposed plan.

The Constitutional Amendment provides a provision allowing the Supreme Court to intervene if the commission fails to adopt a new map by June 30 of the year following the decennial census.

In a tweet on January 10, Governor Pritzker said, “I 100% oppose gerrymandering. Legislative districts should adhere to both the Federal and Illinois Voting Rights Acts, and I support redistricting reform that advances fairness and removes politics from the process. #FairMapsIL”

November 9, 2018, Chicago Tribune article wrote, “In discussing his support for fair maps earlier this year, Pritzker stated, ‘We should amend the (Illinois) constitution to create an independent commission to draw legislative maps.’ And there is no reason to doubt his support of reform as genuine. Pritzker gave $50,000 to the 2014 fair maps initiative, throwing his support behind such an initiative long before he ran for governor.”