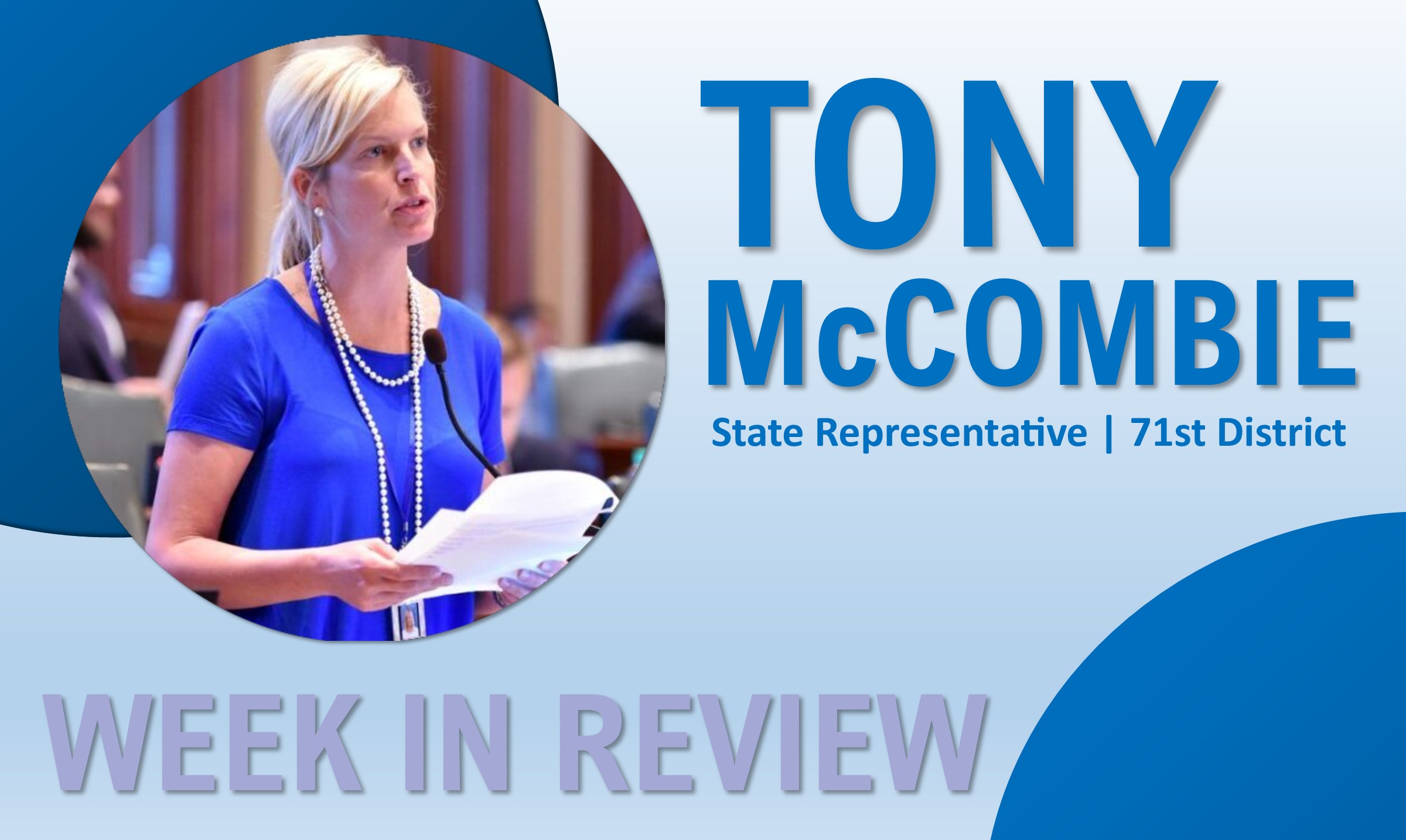 We hope you had a good weekend! PLEASE be sure to let us know what events are coming to your communities and we will be sure to share them on our page. https://repmccombie.com/events/

Fall Veto Session Begins Springfield.  The lawmakers of the Illinois House gathered on Monday, October 28, to consider new business and take action on the vetoes signed by the Governor.  The members of the Illinois General Assembly are mandated by the Constitution to meet for two three-day annual veto sessions every year.  The first veto session was the final week of October, and the second week of veto session will be in the second full week of November.

This six-day period does not, typically, give legislators very much time to take up entirely new business.  Matters that have been left pending from the prior spring session can sometimes be taken up in the veto session.  In addition, lawmakers often find that the veto session is a good time to introduce new bills and start discussions about rising issues in order to get ready for the next full-length session, which will begin in January 2020.  All of the bills and other legislative activities considered by the Legislature during the 2019 veto session and full-length 2020 session can be found on the Illinois General Assembly website.

Rep. Tony McCombie used the first Veto Session as an opportunity to push for House Joint Resolution 87, a bill to create a State Ethics Task Force.  During her bipartisan, bicameral press conference on Monday, October 28 in the Capitol’s Blue Room, news broke that a fellow State Representative was indicted on federal bribery charges.

McCombie and colleagues acted quickly in urging his resignation and when it did not occur by days end, McCombie filed a petition to begin the process of removing the Chicago legislator from office.  Rep. McCombie took to the House Floor on Wednesday to, again, urge the body to take up her Ethics legislation.  The legislation continues to garner bipartisan support.  Rep. Luis Arroyo resigned from office on Friday.

Best Cob buys land for four-phase project in Rock Falls. The Rock Falls Industrial Development Commission unanimously approved sale of 20 acres of land in the business park along Clearwater Drive to corncob processor Best Cob. The city will receive $200,000 for the acreage, which was part of the land it acquired for the construction of its sewer plant.

Best Cob is locally owned, but its manufacturing operations are based in Independence, Iowa. The first phase of the project, which already is underway, is to put up a 83,000-square-foot storage building. The next phase would be a production facility. The third phase would be split between additional storage and manufacturing space, and the fourth stage would be a corporate office.

The company now has corporate operations in both cities, but the new office would make Rock Falls the official headquarters.  Read more here.

New hotel and bistro open in downtown Moline.  The Axis Hotel and Fifth Avenue Syndicate Bistro opened in the Historic Fifth Avenue Building in Moline focusing on a resort experience and promoting all Moline has to offer.  The development cost over $20 million.  Learn more here.

Illinois prepares to sell $750 million in new bonds in November 2019.  The general-obligation debt, backed by tax revenues such as income and sales taxes, will help cover the costs of the $45 billion infrastructure program approved by the General Assembly in the spring 2019 session.  The Infrastructure program includes both “horizontal” infrastructure such as roads and bridges, typically backed by motor fuel tax moneys, and “vertical” infrastructure such as roof repairs and building rehab jobs.  State-owned structures, including university classroom space, prison cellblocks, and State park visitor centers, need work.

The proposed debt sale comes despite the fact that Illinois has the lowest credit rating among the 50 states.  Although Illinois’ BBB ranking technically counts as “investment grade,” many nearby states have much higher ratings.  For example, neighboring Indiana, Iowa, and Missouri all have top-ranked AAA credit ratings.  The state’s population of 12.7 million is in slow decline, with almost stagnant rates of private-sector investment and job creation.

Observers report that Illinois’ reputation as a free-spending, high-tax state with significant unfunded pension debts is reducing the ability of the State to sell its bonds at acceptable interest rates.  Illinois has run a “structural deficit” for many years, in which the budget has been “balanced” by letting bills pile up.  Illinois currently has an unpaid bill backlog of almost $6.7 billion, which could increase to $19 billion in 2024-25 under current projections.  Interest charges on Illinois general-obligation debts and unpaid bills are paid by the State’s taxpayers.

Spring flood disaster application rejected by Federal Emergency Management Agency (FEMA).   Illinois filed for flooding disaster assistance after rivers rose to high-water levels on the Mississippi River, the Illinois River, and many tributaries.  Many communities throughout Downstate Illinois, especially along the State’s western border, suffered historic damage.  However, FEMA has now decreed that the event does not meet the criteria needed to declare a disaster and provide aid.  The decision from Washington, D.C. is currently under appeal.  The Illinois Emergency Management Agency (IEMA) is gathering additional documentation of ongoing damages to individuals and community infrastructure, such as riverside parks and water treatment facilities, throughout Illinois.  An estimated 1.4 million Illinois residents were affected by the flooding event, including persons who suffered loss of jobs or business when key roads were closed or blocked off.

Nationwide damage from flooding and high water in spring 2019 is estimated to have topped $12 billion.  So far in 2019, FEMA has declared nine major U.S. disasters with individual assistance available, including seven declarations for flooding events.  The declarations were made for beneficiaries in the states of Alabama, Arkansas, Iowa, Nebraska, Ohio, Oklahoma, South Dakota, and Texas.  The Iowa declaration encompassed counties directly across the Mississippi River from Illinois.

Rep. Tony McCombie is preparing to file legislation during the Spring 2020 Session of the 101st General Assembly to allow local governments to provide relief to homeowners and businesses on building permits fees to rebuild following declared natural disasters.  Conversations with stakeholders are ongoing on this permissive proposal likely to be rolled out in Spring 2020.

Changes in video gaming laws being felt in many Illinois municipalities.  One of the changes enacted to the Illinois Video Gaming Act in spring 2019 was an authorization, in communities that allow video gaming, for the parlors, taverns, and other places that have these games to install more machines. In most non-truck-stop locations, the allowable upper limit will now be six machines (up from five), if the local municipality signs off on the increase.  The owners of the machines pay taxes to their local governments, and many of these cities and villages are supportive of the additional machines.  As an example of this trend, the Rockford City Council approved the sixth machine this week.  The new state law also authorizes the video gaming machines to offer bigger prizes and take in more money for each play pull.

Illinois to spend $23.5 billion for roads and bridges.  The Multi-Year Plan (MYP) was announced by the Illinois Department of Transportation on Monday, October 21.  Over the next six years, $23.5 billion will be invested in maintaining, preserving and expanding 4,212 miles of roadway and 9.2 million square feet of bridge deck statewide.  Much of the funding for this MYP will come from the motor fuel tax increase enacted by the General Assembly in spring 2019.  Under the Constitution, money raised from motor fuel taxes cannot be “swept” for other purposes, and must be spent on transportation.

This new Multi-Year Plan represents a shift in Illinois’ approach to its roadways and bridges. Previously, the state waited to rebuild until projects had deteriorated so much that they presented safety hazards; under guidance from the Federal Highway Administration, Illinois will now prioritize maintaining its system over time, which is also a more cost-effective way to manage long-term capital needs. To achieve that, this plan dedicates more than 75% of the funds to reconstructing and preserving roadways and bridges, 16% to strategically expanding the system in areas where data have shown the investment will be highly effective and the remainder for necessary traffic and safety improvements.

Of the major categories of state investments in the plan, $7.58 billion will go toward roadway reconstruction and preservation, $4.99 billion for bridge replacements and repairs, $1.59 billion for safety and system modernizations like interchange reconstructions, $3.08 billion for strategic expansion of the system and $2.11 billion for system support like engineering and land acquisition.

A list of District 71 road and bridge projects can be found here.

IMPORTANT DATES/EVENTS NEAR YOU: Please send us your events and we can add them to our calendar!