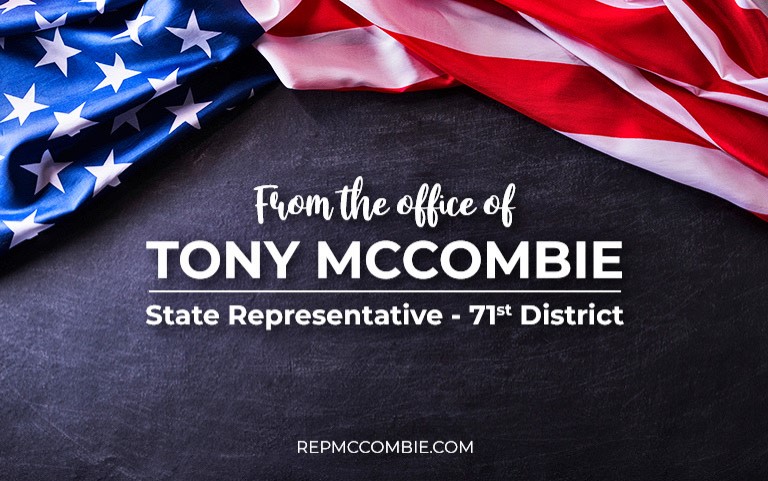 This will be the first e-news of 2020…giving you updates on legislation, state issues, and events our office hosts in District 71 for the year. If you know of anyone who may like to receive this e-newsletter or other periodic email updates from me, tell them to sign up at https://repmccombie.com/email-updates/

Enough is Enough! Minority Leader Jim Durkin calls for investigation after shocking email from Madigan confidant hints at rape cover-up, ghost payrolling.  The call came following the disclosure that a powerful former lobbyist with close ties to House Speaker Michael Madigan, had sent an email to top officials in then-Gov. Pat Quinn’s administration referring to what appeared to be the cover-up of an incident of sexual assault.

In the 2012 email, then-lobbyist Michael McClain urged two top Quinn aides to avoid firing a state worker facing a disciplinary case by arguing that the worker had “kept his mouth shut on Jones’ ghost workers, the rape in Champaign and other items.”

WBEZ has reported that McClain is an important focal point in the ongoing federal investigation into ComEd and the utility’s actions in Springfield. McClain is a former legislator and was one of Illinois’ most influential lobbyists, enjoying a decades-long friendship with and unrivaled access to Speaker Madigan. A federal search warrant issued in the ComEd probe sought records pertaining to Madigan. McClain’s home was raided by federal agents last May and the Chicago Tribune has reported that McClain’s telephone conversations were secreted monitored by federal investigators.

House Republican Leader Jim Durkin has called for a criminal investigation and legislative hearings in response to the disclosure of the email from McClain hinting at a rape cover-up and ghost payrolling in state government.

“This revelation is shocking and beyond words,” Durkin said in a statement this week. “I am disturbed by the fact that horrific and possible criminal actions may have occurred and government officials, Mike McClain and his enablers chose to remain silent instead of taking action.

“There needs to be an immediate criminal investigation into the content of McClain’s email to the administration, and I encourage anyone with information on this to report it immediately to the proper authorities.”

On Wednesday, January 8, Leader Durkin sent a letter to Speaker Madigan requesting the State Government Administration Committee be immediately convened to investigate the allegations from the WBEZ report, that the Committee be granted full subpoena authority, and that the testimony of the individuals called before the Committee must be under oath.

On Thursday, January 9, Speaker Madigan responded in a letter to Leader Durkin, denying Durkin’s request that the State Government Administration Committee investigate the allegations. Madigan also separately denied any knowledge of the allegations described in McClain’s email to the Quinn officials.

On Friday, January 10, Illinois State Police (ISP) Director Brendan Kelly stated that the ISP will work with the Office of Executive Inspector General (OEIG) on the McClain email probe.

Last year, the bipartisan, bicameral Property Tax Relief Task Force was charged with identifying the root causes of Illinois’ increasingly burdensome property taxes and recommending reforms to provide real relief to struggling homeowners across the state. Instead, Democrats on the task force drafted a sham report that failed to include dozens of reform ideas offered by Republican members.

“Democrats’ failure to provide any property tax relief is another clear indication of history repeating itself in Illinois,” Durkin said. “With soaring new taxes hitting families across the state, the time is now to offer real property tax relief and fix this flawed system.”

The oddly large 88-member body again missed the statutory filing deadline for its latest report after the House’s Democrat co-chair of the task force unilaterally sought to submit a self-drafted report without the consent or approval of the whole, supposedly, bipartisan task force.

Considering the entire task force had only met on a few occasions, all House Republicans on the task force rejected the flawed report after being refused an opportunity for thorough review and revisions holding to the bipartisan intent of the task force. Again, they noted, it demonstrates that Illinois Democrats are not serious about implementing substantive property tax reforms.

During his remarks at the press conference, Assistant Leader Grant Wehrli also highlighted the numerous failed attempts to use task forces or similar groups to address tax reform:

High property taxes remains one of the most important issues we face in Illinois. House Republicans have resolutions to negotiate real property tax reforms this spring when we convene that will provide relief for Illinois families. The question continues to be… will the majority party let us?

State revenue report for December 2019. The General Assembly’s Commission on Government Forecasting and Accountability (COGFA) has issued a monthly report on State tax revenues and receipts for December 2019.  During the final month of calendar-year 2019, the overall economic condition of the United States continued to be good, and this favorable outlook was reflected in the revenue numbers that constitute tax payments made to Illinois.  In December, personal income tax payments to the Illinois Department of Revenue rose by 11% to $1,749 million; corporate income tax payments rose by 6% to $478 million; and sales tax receipts rose by 4% to $849 million.

Numbers like these were generating consumer confidence at calendar year-end 2019.  A favorable money-supply and interest-rate picture continued to stimulate global economic growth, including growth in metropolitan Chicago and other “world-class” cities.  Illinois’ economy, including its State budget, continue to be challenged by major worldwide economic trends that are pulling resources away from rural areas and smaller cities oriented towards manufacturing and the production of durable goods.  That being said, COGFA’s staff continued to reassure the General Assembly, soon after New Year’s Day, that the State’s budget was balanced for the first half of FY20; and conditions appear favorable for the second half of the fiscal year, ending on June 30, 2020.

Joint Education Committee hearing on school seclusion policies and “isolation rooms.” The spaces in school buildings, sometimes referred to as “quiet rooms,” are places where students who are seen by teachers and educators as troubled or disruptive can be sent for isolated time-outs.  All such referrals must be documented.  An investigation by ProPublica and the Chicago Tribune published in November 2019, indicated however that in many cases, seclusion and isolation actions were being used for minor disciplinary infractions, which was contrary to state law and policies.  Furthermore, the investigation found that that many students were being sent to “quiet rooms” for hours at a time and told to sit there by themselves without an adult presence of any sort.  The investigation found numerous examples of this course of action leading to outcomes that frightened the children being isolated.  In many cases, these children were students who had previously been classified as children with individualized educational profiles (IEPs), children with “special needs” necessitating careful adult conduct.

As one of what will be several responses to the November 2019 revelations, the Illinois House is working with the Senate to hold joint hearings on the issue.  A panel of lawmakers met in Chicago, and Rep McCombie listened in from District on Tuesday, January 7, to hear testimony.  The lawmakers learned that more than 20,000 students were assigned to physical isolation during the one-and-a-half-year period that began in August 2018 and continued up to the time of the revelations.  These are incidents that were documented under State law.  The House is expected to discuss isolation-room language in the spring 2020 session, which will begin on Tuesday, January 28.

Illinois state universities are partly autonomous and do not have to sign up for the undergraduate-admissions compact.  The universities that sign up are able to standardize their admissions documentation, and can offer greater certainty to Illinois high school juniors and seniors.  Applicants will continue to be required to meet all other admissions requirements at the participating universities.

Distribution firm moves from Lake County to Kenosha. The announcement was by Trifinity Specialized Distribution, a firm that provides logistics and warehousing services for big-box retail outlets such as Walmart and Sam’s Club.  Firm CEO James Merlo explained that the Illinois tax, business and political climate makes Wisconsin a more attractive place to operate.  Trifinity, its 61 employees, and its property manager will now pay income and property taxes to Wisconsin taxing bodies. The announcement was made on Tuesday, June 7.  “The evidence continues to build, showing that we can not tax our way to growth in Illinois,” said Rep McCombie.

Steve Reick calls for “deep dive” audit of State spending. Reick’s proposal would create a new Commission on Fiscal Responsibility and Reform Act.  Under this Act, a bipartisan 18-member commission would look into the current operations of State government and propose comprehensive changes intended to increase performance and efficiency.  The new Commission would submit a report no later than October 1, 2021.

Reick’s bill is a response to a claim by the majority party that “the State is running out of money” and “we urgently need to amend the State Constitution” to make future tax increases much easier to enact and pass into law.  An alternate way to help the State live within its means is to take a hard look at the productivity of its operations.  On the federal level, President Ronald Reagan’s Grace Commission (active in 1982 and 1983) made many proposals to reduce waste and inefficiency in Washington.  The Illinois Commission on Fiscal Responsibility would attempt to achieve similar goals in Springfield.  The bill to create the Commission is HB 4024, filed on Monday, January 6.

January 28, 2020 – Governor Pritzker State of the State – We will advise on how you can watch it as time get’s closer.

Coffee Chats Coming Near Your Soon!