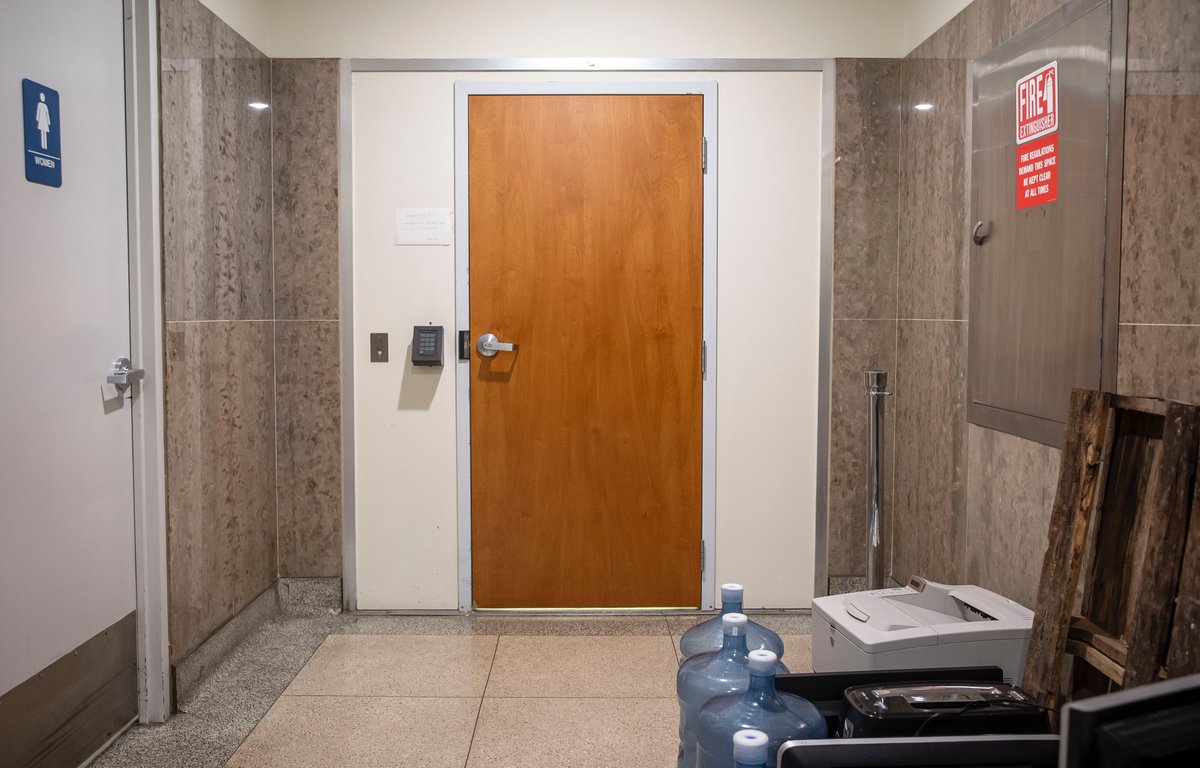 The Illinois House Democrats locked, secret map room in the Stratton Building next to the State Capitol in Springfield.

News broke this past week that Illinois House Democrats got a special sneak peek of their potential new legislative maps, albeit out of public view and, literally, behind locked doors.

At a press conference last week, Governor Pritzker was asked about his veto pledge and this was his response: “Well, as I said, I will veto an unfair map. I have also said that in order for us to have an independent commission, we needed to have a constitutional amendment, something that would actually change the way the process operates today in the Constitution. That did not happen. So now, as we reach the end of this session and I look to the legislature for their proposal for a redistricting map, I’ll be looking to it for its fairness. And that’s something that’s vitally important for our state, as an effect on the next 10 years and representation throughout the state.”

In 2018, then-candidate for governor J.B. Pritzker was asked this redistricting question by Capitol Fax’s Rich Miller: “This requires only a simple yes or no response: Will you pledge as governor to veto any state legislative redistricting map proposal that is in any way drafted or created by legislators, political party leaders and/or their staffs or allies? The exception, of course, would be the final official draft by LRB.”

Pritzker’s response was: “Yes, I will pledge to veto. We should amend the constitution to create an independent commission to draw legislative maps, but in the meantime, I would urge Democrats and Republicans to agree to an independent commission to handle creating a new legislative map. That designated body should reflect the gender, racial, and geographic diversity of the state and look to preserve the Voting Rights Act decisions to ensure racial and language minorities are fully represented in the electoral process.”

In his 2018 gubernatorial candidate questionnaire in the Northwest Herald, then-candidate Pritzker stated, “…and I support ending the gerrymandering of districts to encourage more competitive elections.”

The Governor again reiterated this position after his 2020 State of the State Address by promising to “veto any unfair map that gets presented to me.”

Maps drawn by politicians picking their voters are more likely to consider political wins instead of communities of interest. We also know that the data used as the basis of the new maps should fairly represent our communities as well as the State’s unprecedented investment in the 2020 US Census count. Full Census data is needed to build maps which adequately consider population trends in rural communities.

The American Community Survey, which is the less-than-adequate data set being proposed as the data source by the Illinois majority, has a proven history of undercounting populations in cities and villages under 60,000 people. To be clear, the 71st District, which I represent, has no cities or villages over 60,000 people.

We cannot allow rural Illinois – the Illinois outside of Cook County and the suburbs – to be significantly undercounted to accommodate a legislative majority avoiding fairness and transparency. I invest my time and treasure into good public service because I know my neighbors cannot afford the expense of shady policy. I am loudly sounding the alarm on the shady public policy of allowing politicians to use inaccurate data behind locked doors to pick their voters at the expense of communities of interest – especially mine, here in rural Illinois.